Is That A Puppet Or Is It Real? 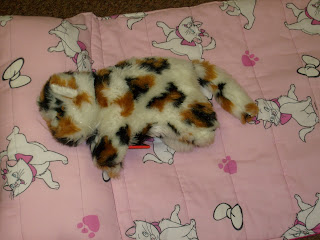 One of the things I use with kindergarten classes is a Peaceworks curriculum that has a puppet, named (originally enough)  I Care Cat.  Kids love this puppet.  I've used the same one for 18 years and he's a hard worker but still holding up pretty well.  I figure the day the fabric falls apart is a sign I need to retire.  Along with the puppet is a CD that talks for the puppet, sings songs and reviews the basic I Care Rules.  Ask any kindergartener in my school what the I Care Rules are and they can rattle 'em off in a flash.  It's a fun effective program for teaching kids how to get along with each other and I fell in love with it when I first encountered it years ago.  Here's a link to their site:  Peaceworks Education Program 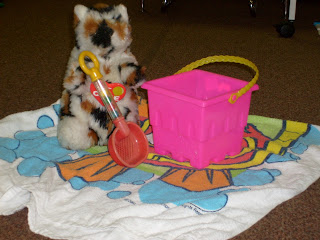 Over the years, I've collected a lot of hysterical comments and questions from kids about the puppet.  Mostly they like to stop me in the hall and ask me where I Care Cat is and how he's doing.  They expect an answer too and aren't surprised to hear he's on vacation at the beach or taking a nap in my office.  As I begin a lesson, there often is an ongoing debate as to just how real he is.  Usually, whenever I pull him out, a child in the group feels the need to inform the rest of the class, who are perhaps not as observant as he or she, that "It's a puppet you know!"  This happens whether it's the first time I've been in the room or the 50th time.  One day following this "It's a puppet !" announcement, another child turned to the proud informant and said with great indignation, "SHHHH, you're going to hurt his feelings saying that!"  Then there was the day I finished my lesson and was packing up my CD player when a child came up to me and said, "That was really good... how did you get his voice in the radio?"

Finally, there was the time a teacher whose own child happened to be in kindergarten told me that while she was scolding her child at home one day, he informed her that she was not using I Care Language and I Cat Cat would be very sad if he heard her.

Having a bad day?  Spend a little time in conversation with a five year old.  It'll change your mood and make you smile.  You gotta love kids...
Posted by Lynne Watts at 1:11 PM