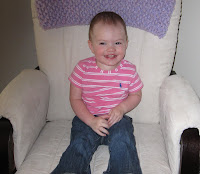 I was at a wedding shower recently and a friend of mine had her 19 month old grand-daughter, Carleigh with her.  The bride to be was opening her gifts and encouraging Carleigh to help with the unwrapping.  As most toddlers do, Carleigh loved the unwrapping of the gifts more than anything and as she ripped off the paper and opened every gift, she looked up at everyone and said, "WOOOW!"  It wasn't a little wow, it was a long drawn out southern drawl, WOOOOW.  It was cute the first time and absolutely hysterical the 50th time.  Every gift, no matter what it was or even if she didn't know what it was, set her off.  I got to thinking, "What if we all approached life (really the ultimate gift don't you think) with such a positive and enthusiastic attitude?"

Along those lines, I just read a delightful children's book called Absolutely Not

by Matthew McElligott.  It is the story of two bugs, Gloria and Frieda who have very different attitudes about life.  Gloria is positive and always sees the possibilities in life.  Frieda on the other hand is worried about everything and as her friend tells her, "you find something bad in everything you see."  Gloria's positive approach creates a joyful fun filled day of adventure and Frieda's approach (often over-ruled by Gloria) eventually keeps them safe from danger.  What is the best balance between these two perspectives?  Are there advantages in each?  This book could start a very interesting discussion between you and your child.
Posted by Lynne Watts at 9:56 AM